Intense tension headaches and irregularities with the heart rhythm

Female patient with minor scoliosis complaining about pain and dysfunction in the jaw left side. Patient is also experiencing intense tension headaches and irregularities with the heart rhythm. Muscles of the trapezius and the neck in general are very tight and tense. She has been examined by GP, Cardiologists and neurologists. Pathology has been ruled out and different medications have been tested.

On her spare time she plays tuba in an orchestra and lives an active life and enjoys spending time outside in the nature. She is quite frustrated due to pain and dysfunction causing her difficulties playing the tuba. Tuba playing increases her irregular heartbeat, so does sleeping on her back. The headache comes and goes with variable intensity and duration. She has constant problems with the function of the jaw and local pain by the jaw and in the area back of her ear. Stress increases symptoms and she also might experience motoric tics left side face/jaw. 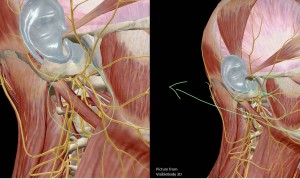 Treated the higher cervical muscles on left side to decrease pressure against the posterior atlantooccipital membrane with ART. Continued to treat the rectus capitis lateralis to decrease pressure/compression of the vagus nerve and spinal accessory nerve. Treated also the rectus cap. minor and major to introduce retraction of the skull on c1, and secondary decrease compression from these structures towards the atlantooccipital membrane. Finally treated her TMJ passive structures and the digastric muscle accompanied by the sternocleidomastoids. Patient was carefully instructed during the treatment session and she was asked to sit and stand in between each treatment protocol.  Her system had taken quite some stimuli during treatment and testing. She explains she feels “light” and explains she can see and hear clearer.

When meeting up for the second session she explains that her heart irregularity has stopped and that she has not yet experienced any headache. She feels like the tight cap on her head has been removed. Her jaw was still painful, but moving much better. We continued our treatments 7 times over a period of 6 weeks. Patient experienced lasting results already after a couple weeks. The treatments change focus to performance along the way. Patient was also instructed in specific home exercises during the entire treatment period.

1 year later she is playing tuba and she is pain free. Complex cases can be solved!